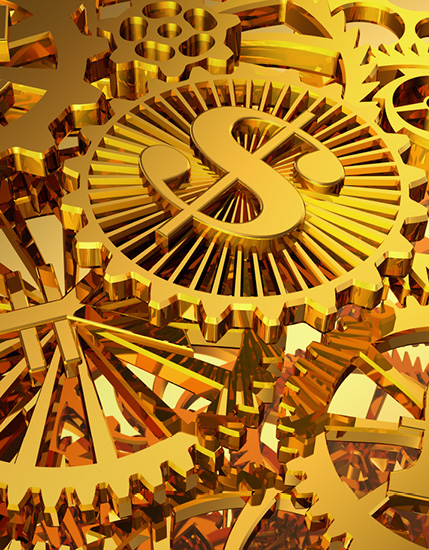 Capitalism1   is like an internal combustion motor
Dirty, inefficient but all we got at the moment
But we don’t get a choice of which world that we
live in
So if I can’t beat’em, then I guess I’m gonna  join’em

Private property is a jury-rigged abstraction
For carving up the world and making commercial
transactions
Commodification of everything on the planet
Air and water, swamps and trees and granite

The biggest savings for those who need them least
Knowledge, opportunity, and management techniques
Meaningful work only for the highest quintile
The tippy-top of a Yertle the Turtle2   cash pile

1  Capitalism is often touted for its efficiency, and compared with its historically most common large-scale  rival, centralized planned economies, it is a fair enough claim. Many have noted, however, that private profits can, and have regularly, been derived by dumping costs onto the public, in the form of environmental damage, shifting risks upon workers, and so forth. In addition, however, capitalism is a massive waste of human potential. Most people in capitalism perform largely uncreative, rote tasks that waste the majority of their own potential abilities. Roughly only 20% of the society, at the top, do jobs that require real passionate engagement and creativity. Hence, like with internal combustion engines, the vast majority of the human energy is wasted. For more see economist Robin Hahnel, Economic Justice and Democracy: from competition to cooperation (2005), (he can also be found easily on Youtube), as well as any of the many books on Participatory Economics, http://www.participatoryeconomics.info/. Note: one does not have to find Participatory Economics to be entirely or even partially a solution for society to find its critique of capitalism to be much more penetrating than what is often offered elsewhere.
2  Yertle the Turtle is Dr. Seuss character who forces other turtles to stack themselves to create a turtle-tower for him to perch upon so he can be “higher than the moon.” https://www.youtube.com/watch?v=U5ihC2XpCVs.