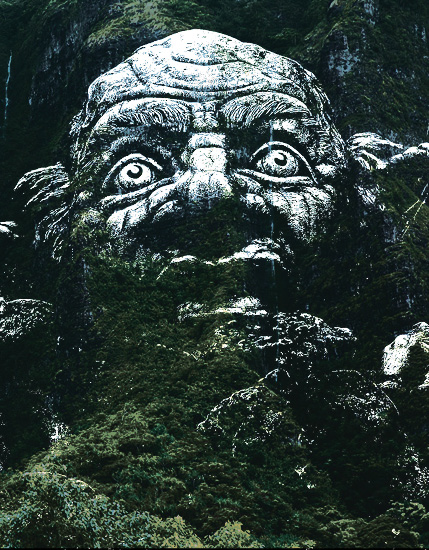 He sees the rustle of the leaves, he thinks it’s some entity
He thinks an agent wants the leaves, to go tumbling down the street
At the statue made of stone, are we all alone?
My dog sees him there, barks ‘cause she’s scared

And over time has evolved agent detectors in us all

1An “agent” is anything that has conscious intention (and perhaps that can act on those intentions as well, depending on the definition). “Agency detection” is basically the ability to discern whether there is another agent, usually another organism, somewhere around you. Virtually any organism above a certain level of complexity has this ability as an evolutionary adaptive trait—to detect friends, enemies, and/or prey. “Overactive Agency Detection” is just like it sounds: when an organism detects agency when it is not actually there. Scientists theorize that overactive agency detection has a decided evolutionary advantage over less sensitive agency detection, even if the more sensitive may, on average, be more accurate. “Better safe than sorry” is the evolutionary concept. The organism whose agency detection is overactive may mistake the rustle of leaves for a threat, but will more likely survive because it is less likely to mistake the predator for simply the rustle of the leaves. My dogs saw the statue as an agent the first time she saw “him”—but not after that.
2From the perspective of philosophical naturalism (atheism or agnosticism) the fact that most people are religious, in the face of a severe dearth of actual empirical evidence for an agent that consciously controls events in the world, requires an explanation. Moving from overactive agency detection in other organisms to humans’ overactive detection agency in general is an explanation of why so many are religious. This supernatural agent can be either a monotheistic god, or simply the animistic believe that all entities in nature: rocks, mountains and other inanimate objects, themselves have conscious agency. For more on this idea see Daniel C. Dennett, Breaking the Spell: Religion as a Natural Phenomenon, (2006). http://ase.tufts.edu/cogstud/dennett/.