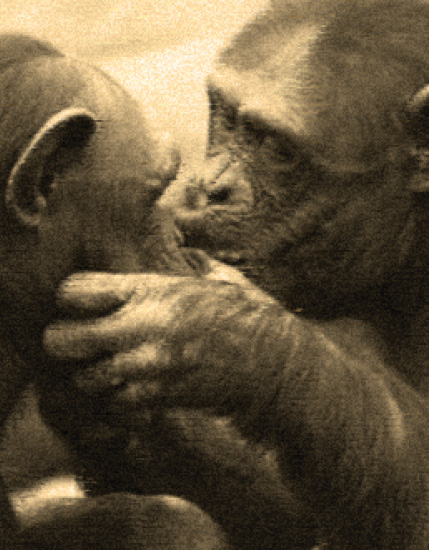 1Bonobos and chimpanzees are approximately equidistant from homosapiens in evolutionary descent. The last common ancestors of all three existed about 5.5 million years ago. Bonobos evolved south of the Congo River in Central Africa, chimpanzees to its north. Unlike chimpanzees on the north side of the Congo, bonobos had a relatively high resource to population ratio and the lack of Gorillas as competition. The different evolutionary contexts help explain the difference between the matriarchal and less violent bonobos and the male-dominant, more hierarchical and violent chimpanzees. Human sexuality, at least, far more resembles bonobos, though many aspects of human society today obviously shares many qualities with the chimpanzees. Bonobo’s have sex in the ways the song describes. Female chimps, on the other hand, have sex when they are in heat, with as many males as possible, and always in one position, from the rear. For more see The Bonobo’s Handshake: A Memoir of Love and Adventure in the Congo, Vanessa Woods. https://www.bonobohandshake.com/. For more perspectives on prehistoric sex patterns see Marlene Zuk, Paleofantasy: what evolution really tells us about sex, diet, and how we live http://books.wwnorton.com/books/Paleofantasy/. For a strong version of the anti-monogamy argument there is the controversial Sex at Dawn, Christopher Ryan and Cacilda Jetha. https://books.google.com/books/about/Sex_at_Dawn.html?id=zV4PuFn5gvoC&source=kp_cover&hl=en. For an argument against any kind of fixed “-ogamy” for homosapiens , see P.F. Clark “Humans are (blank)-ogamous” https://kevishere.com/2011/07/05/part-1-humans-are-blank-ogamous/. To summarize Clark: “We are not a classic pair-bonded species. We are not a polygamous, tournament species either…. What we are, officially, … is a tragically confused species.” (Robert Sapolsky)
2The last common ancestor of humans and gorillas lived some 9 million years ago. Gorillas are a “harem” animal, with the males much larger than the females (a high degree of sexual dimorphism) because the males physically compete to gain a harem of as many females as possible.